Find MBA has published a list of the most popular MBA schools in the UK.

Please note that this list is not based on ranking, but popularity. 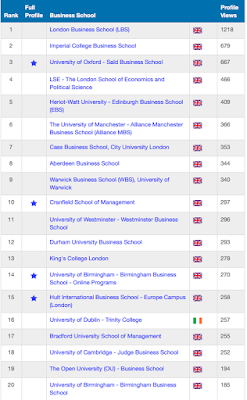 For more information, please check out FIND MBA
Posted by ポール・カレンダー at 6:11 PM No comments:

This might be surprising reading for some. Remember this shows the most popular, not the most highly ranked.  Here are the top 25.

Find MBA has published the following list of the most popular MBA programs in the U.S.

This might be surprising reading for some. Remember this shows the most popular, not the most highly ranked.

For more information about the other 80 schools, please go to FIND MBA

Find MBA is an excellent source for all sorts of MBA information.
Below is an excerpt of the top-20 MBA programs according to Find MBA. 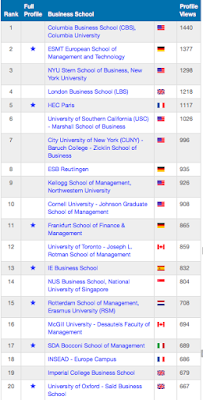 When looking at rankings information, be sure to take methodology into account. The most robust rankings use a variety of factors, from post-graduation salary to diversity within MBA programs, to rank programs.

On FIND MBA’s interactive ranking map, you can see what business schools are ranked by The Financial Times (FT), The Economist, and Bloomberg’s Businessweek. Below the map are links to various MBA  ranking sources.

100 Most Popular Business Schools in the United States

50 Most Popular Business Schools in the United Kingdom and Ireland

100 Most Popular Business Schools in Europe

100 Most Popular Business Schools in Asia

Business schools are reporting a resurgence in applications for MBAs after four years, according to the Association of MBAs (AMBA). Applications for AMBA-accredited MBA programs rose by 5% in the year to 2015, compared with a 14% drop over the previous four years.

But competition remains tough, with enrollments remaining static or even falling in some regions, despite the increase in interest.

The figures, contained in AMBA’s annual Application and Enrollment Report, cover 218 business schools across six continents and suggest that confidence in the MBA is returning.

Applications reached record highs in the wake of the 2008 financial crisis, as a wave of redundancies saw banking and consultancy executives try to widen their skill base.

But as western economies came out of recession applications started to drop, with AMBA reporting successive annual fall from 2011.

Coupled with an increase in applications for specialist masters programs, the drop had led to fears that the generalist MBA was in terminal decline. This week’s figures suggest the MBA has not yet had its chips.

Business schools in Western Europe reported that applications rose 29% between 2011 and 2015.

Worldwide enrollments over the same period have fallen by 13%, and remained static from 2014 to 2015, suggesting that competition to get onto an accredited program is fierce.

International students remain a major target market for business schools, particularly in the West. North America has the higher proportion of international applicants, at 72%, with the U.K. just behind at 71% and Western Europe at 58%. The lowest is in China and India with 2% and 1% respectively.

The highest number of overseas-based enrollments were in North America, with 60%, and the U.K., with 59%.

While part-time study is the most popular form of program, there are regional variations. In the U.K. 69% of programs are full-time, compared with 73% part-time in Latin America.

The China Europe International Business School in Shanghai, which counts executives of Alibaba Group Holding and Tencent Holdings among its alumni, is the No. 1 school in Asia for 2017, after placing second last year.

A total of 12 Asian institutions made the top 100 list, released on Monday: Five from China, including three Hong Kong schools; four from India; two from Singapore; and one from South Korea. Eight improved their positions. 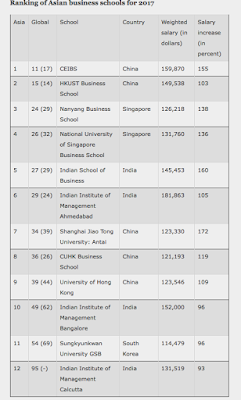 Globally, CEIBS ranks 11th, up from 17th last year. It surpassed the Hong Kong University of Science and Technology, last year's leader in Asia, which now stands at 15th place in the world.

CEIBS was co-founded by the Chinese government and European Union in 1994. Over 60% of its faculty hails from abroad, but the program focuses on China, including case studies of domestic companies, consulting projects with companies in China, and a "localization internship program" for international students. Roughly 190 MBA students -- about 60% of them from mainland China -- graduate each year.

The latest Financial Times global MBA ranking sees INSEAD maintain its top spot with Stanford Graduate School of Business rising from 5th to 2nd and Wharton falling from 2nd to 3rd. Harvard Business School has dropped from 2nd to 4th while Judge Business School jumps from 10th to 5th. 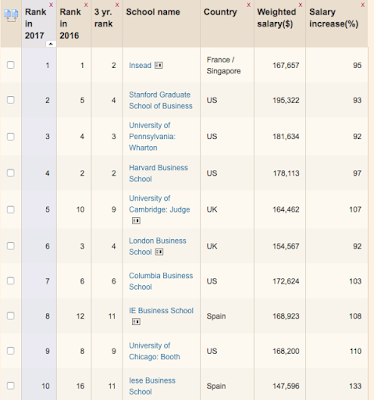 The FT surveys alumni three years after graduation so the programs must be four years old. For schools to enter the ranking calculations, the FT requires that a minimum of 20 per cent of alumni reply to the survey, with at least 20 fully completed responses.

This ranking uses data collected from the schools and the 9,000 alumni who completed a full-time MBA at them in 2013 — a response rate of 41 per cent.

The ranking has 20 different criteria. Alumni responses inform eight criteria that together contribute 59 per cent of its weight. Eleven criteria are calculated from school data, accounting for 31 per cent of the final ranking. KPMG audits a number of schools every year. The remaining criterion, the research rank, counts for 10 per cent.

The first two alumni criteria are average income three years after graduation and salary increase compared with pre-MBA salary, both weighted at 20 per cent. For the latter, half of the weight applies to the absolute increase and half to the percentage rise (published). Salaries are converted to US dollars using October 2016 International Monetary Fund purchasing power parity rates.

The salaries of non-profit and public sector workers and full-time students are removed, as are the highest and lowest salaries from each school, to calculate a normalized average. Finally, salaries are weighted to reflect differences between different sectors.

“Value for money” for each school is calculated by dividing their average alumni salary three years after graduation by their MBA’s total cost, including tuition, opportunity cost and other expenses. Any financial help given to alumni is subtracted from the total.

The school criteria include the diversity of staff, board members, students by gender, nationality and the MBA’s international reach. For gender criteria, schools with a 50:50 composition score highest.

With the exception of the “PhD graduates” category, criteria based on school data use 2017 information only.

The research rank is based on the number of articles by full-time faculty in 50 internationally recognised academic and practitioner journals. The rank combines the number of publications from January 2014 to October 2016, with the number weighted relative to faculty size. The list of journals used for this criterion was updated and increased from 45 to 50, following a consultation with business schools in June 2016.

The FT Global MBA ranking is a relative listing. Schools are ranked against each other by calculating a Z-score for each criterion. The Z-score is a statistic that shows where a score lies in relation to the mean. These scores are then weighted as outlined in the ranking key and added together for a final score.

After removing the schools that did not meet the response rate threshold from the alumni survey, a first version is calculated using all remaining schools. The school at the bottom is removed and a second version is calculated and so on until we reach the top 100. The top 100 schools are ranked accordingly to produce the 2017 list. 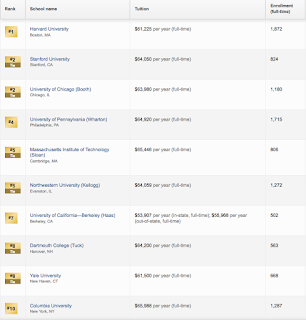 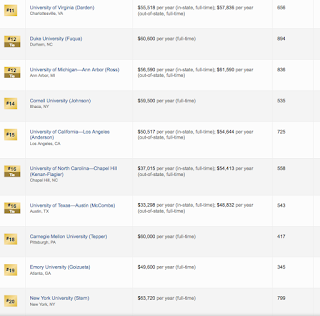 10 MBA Programs With the Most Applicants 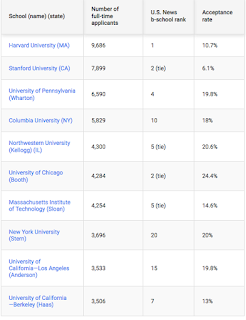 The 10 ranked MBA programs with the most applicants for fall 2015 are all selective programs that accepted a small minority of applicants. Each of these programs placed in the top 20 in the U.S. News 2017 Best Business Schools rankings. Eight of these schools rank in the top 10, and all have acceptance rates less than 25 percent. 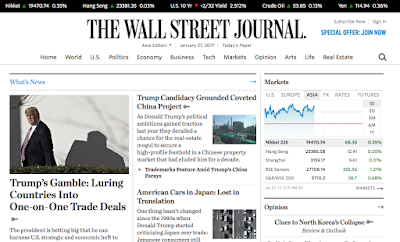 Political changes in the U.S. and United Kingdom may be spurring some graduate business-school students to look elsewhere for their degrees.

More than a third (37%) of 760 prospective MBA candidates who are non-U.S. citizens say they are less likely to study in the U.S. following the election of Donald Trump as president.

For more please the following article in the Wall Street Journal

What do MBA admissions directors want in applicants? 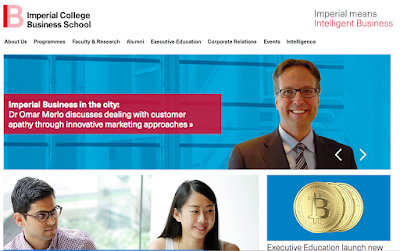 Schools report trends including an increasingly international mix of potential students and a rise in the number of women.

Crystal Grant, head of admissions at Imperial College Business School in London, says international diversity in the classroom has grown. She adds: “More candidates are also planning to launch entrepreneurial ventures or join start-ups immediately after their MBA rather than three to five years after.”

Ceibs, based in Shanghai, China, has a growing number of students who want to remain in Asia after graduation. “Sixty-four per cent of international students in the current class, to graduate in 2018, highlighted Shanghai and Asia-Pacific as their desired job locations,” says Yvonne Li, MBA director of admissions and career services. “This compares with 30 per cent in the previous class.”

MBA students are coming from a wider range of industries. Brandon Kirby, MBA recruitment and admissions director at Rotterdam School of Management, says more applications are from the non-profit sector, as non-governmental organizations start to behave more like businesses. “We have also seen an uptick in Latin American applications,” says Kirby. “And we are also seeing an increase in applications from the healthcare and legal industries.”

For more please the following article in the Financial Times

Why your GMAT score is important, and what it tells MBA admissions people about you 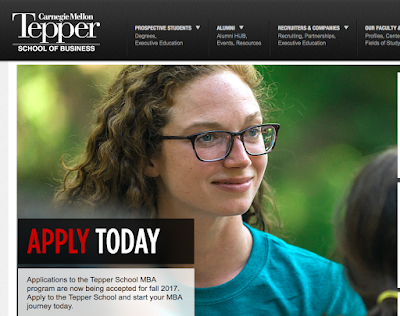 According to many MBA admissions people, the GMAT is a very important part of the overall application process. According to Yvonne Li, director of MBA admissions at CEIBS in Shanghai, a GMAT score can provide an admissions committee with a range of indicators about a potential MBA student's skills, as well as his or her overall fit with the school.

A GMAT score can also help a business school understand if an MBA candidate has the necessary quantitative skills, which can be a big part of the business school experience.

“Because our program is rooted deeply in analytics, a student's ability to process and solve complex problems is important,” says Kelly Wilson, the executive director of masters admissions at Carnegie Mellon University's Tepper School of Business.

For more please the following article in Find MBA 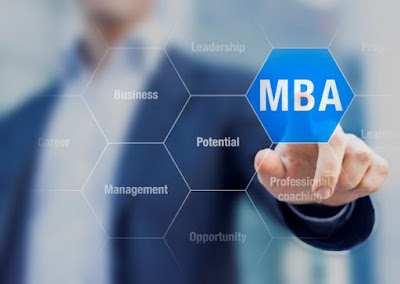 Global business schools have seen a resurgence in the number of applications to MBA programs following a four-year decline, according to a new worldwide report.

In its 2016 Application and Enrollment Report, the Association of MBAs (AMBA) found a global net growth of 5 per cent in the number of applications for AMBA-accredited programs in 2014-2015. In the four years prior to 2014, application numbers had decreased by 14 per cent.

For more please the following article in the Times Higher Education
Posted by ポール・カレンダー at 7:41 PM No comments: