Getting a Master of Business Administration, or MBA, has long been a way to kick-start your career or catapult yourself in to the C-suite.

This year, Stanford Graduate School of Business climbs three places to knock Harvard off the top spot, as the best place to get a full-time MBA, according to the QS Global MBA Rankings 2019.

The Californian institution, known for its proximity to Silicon Valley, achieved a perfect score for the entrepreneurship and alumni outcomes indicator, which looks at where graduates end up working. 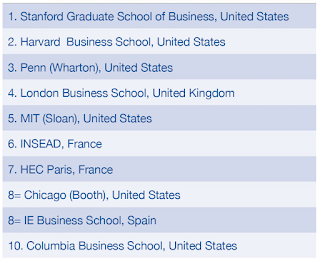 Harvard Business School, part of the Ivy League group of elite universities, slipped into second place in the overall index, followed by Wharton in Pennsylvania, London Business School in the UK and MIT Sloan School of Management, in Cambridge, Massachusetts.

While five of the top 10 are US-based, France and Spain are represented alongside the UK. The French institutions dropped down the list compared with 2018, with INSEAD falling to seventh from second place, and HEC Paris dropping to sixth from third.


In Asia, INSEAD’s campus in Singapore topped the list, followed by China Europe International Business School (CEIBS) in Shanghai, the University of Hong Kong and NUS Business School in Singapore. India rounded out the region’s top five, represented by the Indian Institute of Management, IIM, in Ahmedabad.

Education network QS also collected information about the average MBA student, who tends to be 29 years old, has 5.6 years of work experience and with a pre-MBA salary of around $47,000. After graduation, they can expect to earn $83,000, it said.

While doubling your salary might seem appealing, it’s not necessarily that straightforward. Stanford’s programme has a 7% acceptance rate, according to QS, and costs more than $120,000.

For the “return on investment” sub-index, the winner was Germany’s Mannheim Business School, which ranked 42 overall, but where the fees are less than half of those of its Californian counterpart.
Posted by ポール・カレンダー at 10:18 PM