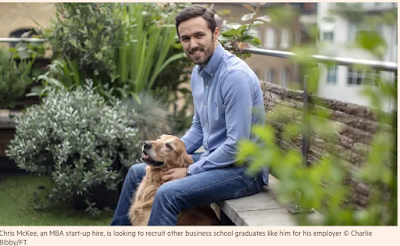 New businesses want to take on people who can run the company while CEOs secure funding Chris McKee, an MBA start-up hire, is looking to recruit other business school graduates like him for his employer

New Age Meats is not a conventional MBA recruiter. The San Francisco food start-up, which is developing a technique to grow meat from animal cells, has yet to close its first funding round and has just four people on the payroll. But its first hire was MBA student John Pattison, a former management consultant and US army officer, who joined fresh from his graduation ceremony from NYU’s Stern School of Business in May.

Brian Spears, New Age Meats’ co-founder and chief executive, was sure that an MBA graduate would provide what he needed. He wanted someone who could think and act like him, and lead day-to-day operations while he focused on closing the company’s $3m seed funding round.

“My full-time job at the moment is fundraising,” Mr Spears says. “I need help to do all the other things to run the business, and someone like John, with an MBA, is ideal for that.”
This year’s annual global MBA recruitment survey by business school entrance exam administrator the Graduate Management Admission Council, found that 62 per cent of those defining themselves as start-ups planned to hire MBA graduates in the coming 12 months, up from 45 per cent in 2018.

This mirrors an increase in MBA hiring by the more established technology companies, such as Microsoft and Amazon. These Big Tech groups are now the largest (by number of people hired) recruiters at several leading business schools, having overtaken management consultancies and investment banks.

Today’s tech start-ups are in many ways just aping their peers, according to Sangeet Chowfla, GMAC’s president and chief executive.

For the MBA students, the attraction of start-ups is the ability to see their skills making an immediate impact. “It creates a win for both sides,” Mr Chowfla says.

For MBA students looking to get hired by a start-up, timing is crucial. Unlike investment banks and management consultants, early stage businesses do not have long, well-structured processes for MBA recruitment involving campus visits and multi-stage interviews. They tend to hire on demand and need potential recruits to be able to start immediately, so success involves a high degree of luck and obsessiveness to get a foot in the door.

Christian Keil, who completed his MBA at Berkeley’s Haas School of Business in May, was initially rejected when he applied for the role of “supply chain specialist” at Astranis, a designer of low-cost satellites. The company is so young that it only secured its first customer at the beginning of the year.

“I was patently unqualified,” admits Mr Keil, whose experience prior to Haas had been in management consulting.

However, having found a company that interested him — Mr Keil had tried developing a blockchain-based billing business for mobile roaming contracts while at Haas — he began following the jobs board on the Astranis website and applied again when an operations manager role was posted.

This time he got the job.

“I was lucky to reapply at the perfect time,” Mr Keil says. “It turned out they had changed their recruiting strategy to find generalists over specialists.”

Mr Keil was also lucky in that Astranis decided to take a chance on hiring a business school graduate, something it had not done before, according to Miki Heller, the company’s vice-president of business operations and strategy. The decision to hire him had more to do with his start-up experience than his degree, however, she notes.

“We don’t spend too much time worrying about credentials,” Ms Heller says. “Instead [we] look at what people have actually accomplished.” Mr Keil did take a pay cut. He estimates that his base salary at Astranis is three quarters of what he could have earned at a consultancy or bank with his MBA. But at Astranis he gains an equity stake in the business.
“People who come to work for us usually agree our compensation package is going to be incredibly valuable,” Ms Heller says. “They are usually more motivated by our mission and the work they’d get to do here than the money.”

Working for a start-up might seem risky, but it is more secure than taking all the risk yourself, according to Mr Keil. His student venture was offered a term sheet outlining the terms and conditions of a funding offer from a private equity group, but Mr Keil turned it down in favour of his salaried role and an offer of an equity stake at Astranis.

“My idea was good but not truly great,” he says. “I wasn’t ready to bet the next seven to 10 years on it given what I had learnt about the market.” Chris McKee, senior commercial manager at Paws.com, is an MBA start-up hire now looking to hire other business school graduates like him for his employer, a London-based venture providing dog food deliveries to animal owners.

“We cannot offer high salaries, but we can provide purpose,” Mr McKee says. “We want to make a commercially viable business to enable us to make a difference in the pet ownership business, which I think is a much more motivating factor for an MBA.”

Despite a rise in the number of MBA graduates hired by start-up owners, there are plenty of businesses which remain wary of hiring from a business school. Jeff Lynn and Carlos Silva met as MBA students at Oxford’s Saïd Business School and founded equity crowdfunding site Seedrs in 2009 straight after graduating. More than £620m has been invested through the platform, which employs 90 people at offices in London, Berlin, Amsterdam and Lisbon. But the company has never hired an MBA graduate and Mr Lynn says he cannot foresee them doing this, unless the firm grows significantly.

Most Seedrs hires are specialist roles, in particular software engineers, lawyers and product experts, he notes.

“MBAs are very good at strategy and analysis,” Mr Lynn says. “But Carlos and I said the one thing we don’t need is more theoretical insight.”
Posted by ポール・カレンダー at 3:47 AM